It’s been two weeks now that I’ve started to use Pinterest, as part of my New Media Marketing class that I’ve applied to at ZSEM, in Zagreb. Now is time to briefly describe what I liked and disliked in this Social Newwork and how I think it can be part of a company communication or for personal use.

My first impression (which still is what I think) is that Pinterest is really a Twitter-like for photos except that you don’t express « what’s going on right now » but « what’s the mood right now » and you don’t have to say it in 140 characters but with a beautiful photo.

I’ve been on Twitter since 2008 (follow me) and for the most part I just read what people that I follow are talking about. I usually don’t post much. With Pinterest, I can do the same thing but with visual emotion looking a great photos. I haven’t post so much on Pinterest these past few days but I’ve enjoyed sighting at beautiful photos.

Ok, that was the me-myself-and-I part of the post, thanks for the ones reading it until here and let’s talk about what’s great on Pinterest and who should use it.

While the first usage on Twitter is boring as hell, expressing your thoughts with a picture is way more interesting and emotional. Let’s study the famous: TGIF (Thanks god it’s Friday) thing. On Twitter, it’s so boring having hundreds of « TGIF hihi LOL 😀 😀 sooo cool » while it’s can be expressed with creativity on Pinterest. Sources : @hey_AM_RICKY for Twitter and Silverbox Creative for Pinterest 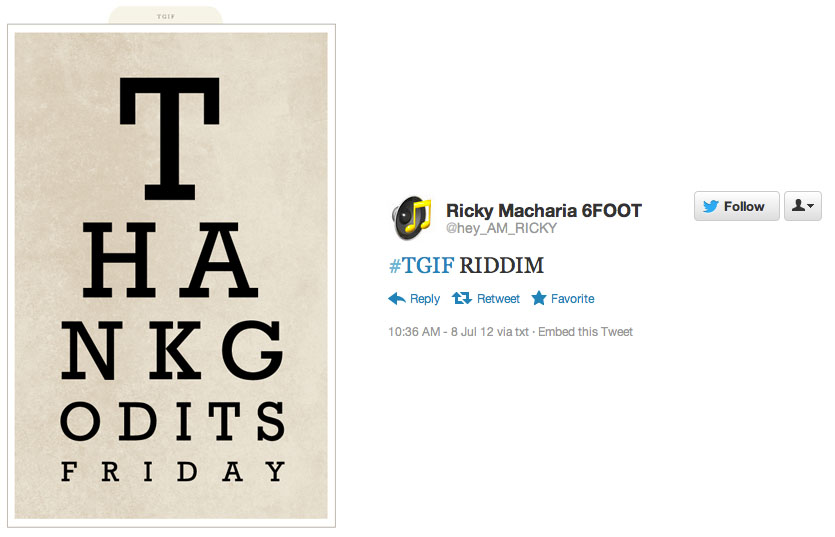 For companies, the difference is even greater. There are plenty of companies where Twitter isn’t interesting while Pinterest can reveal extremely useful. I’m talking about companies (or freelance) using creativity for a living: Photographs, designers or even bloggers, but also companies that need pictures to express their assets: real estate companies for instance.

That’s all for the moment, but feel free to follow me on Pinterest to start sharing things together.

Zagreb: this is the end

I also sign here my last post around my New Media Marketing class at ZSEM. I really want to thank the lecturer for her tremendous work making this class really interesting with many impressive guest lecturers. I’ve learnt a lot.

Thank you for reading me,